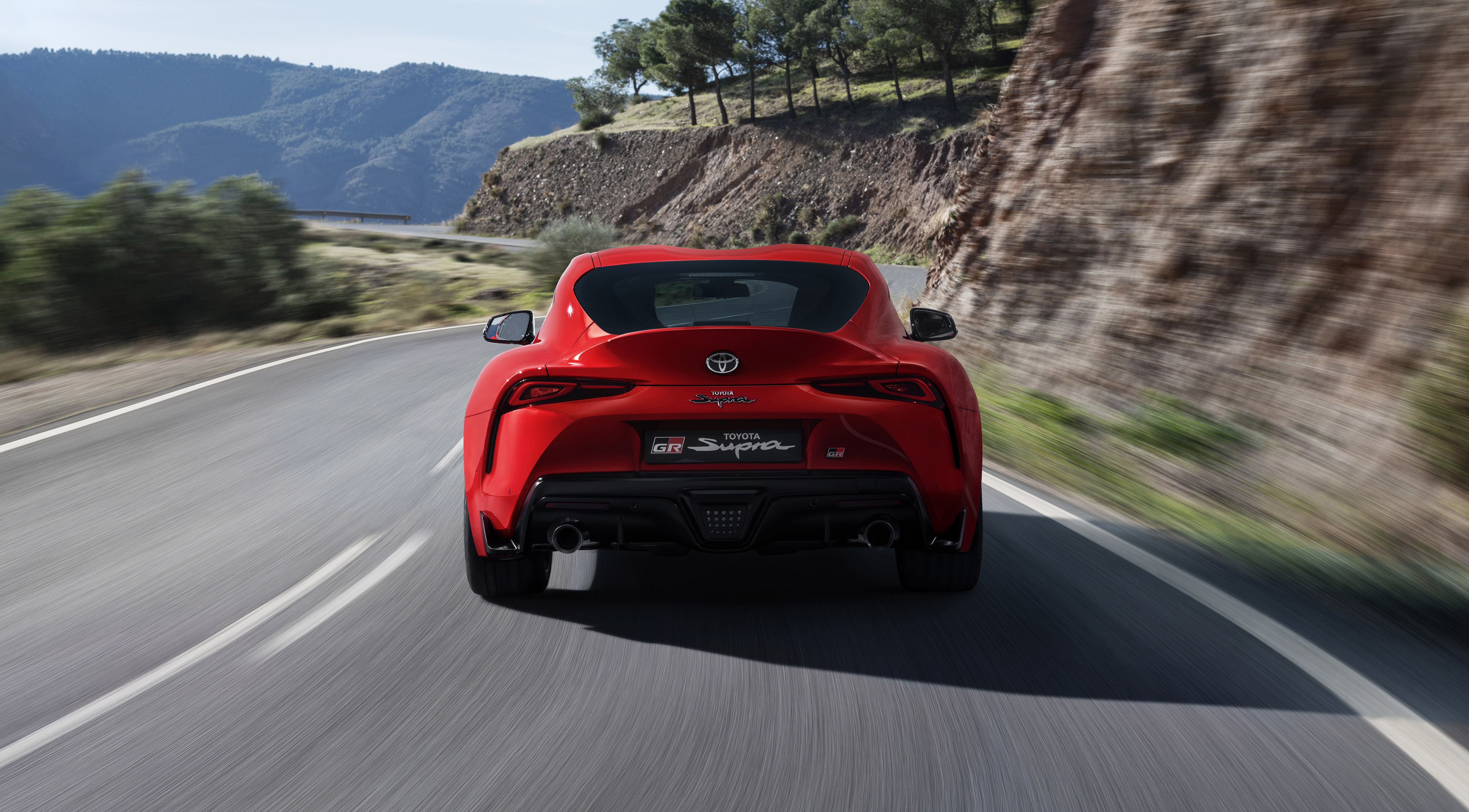 In January 2019, the fifth-generation GR Supra, the first global Toyota GAZOO Racing model, makes its undisguised world debut at the North American International Auto Show in Detroit, ending years of anticipation and speculation among sports car enthusiasts around the world. Behind the new Supra is a 50+ year lineage of unique Toyota sports and GT cars. Ahead of it awaits the world’s great driving roads, some of which were used to develop this all-new expression of Toyota pure sports car performance.

The 2020 Supra goes on sale in summer of 2019 and will be available in two grades – 3.0 and 3.0 Premium, as well as a Launch Edition which will be based on the 3.0 Premium grade. Driving enthusiasts can look forward to an exhilarating blend of power, precision and agility thanks to a rear-wheel drive design that honors Toyota sports car heritage with its low center of gravity and optimal weight balance. There is a strong connection to Toyota’s 1967 2000 GT and 1993-2002 Supra in both design and mechanical configuration.

Yet, the 2020 Supra is a fully forward-looking sports car, brimming with a cutting-edge powertrain, chassis and multimedia technology. Like the pinnacle of the previous Supra series, the 2020 model will be powered by a turbocharged inline six-cylinder engine. The new Supra’s 3.0-liter twin-scroll turbo six will produce 335 hp and 365 lb-ft of torque and will be teamed with a quick-shifting 8-speed automatic transmission with paddle shifters. Toyota projects 0-60 mph acceleration in 4.1 seconds, which makes this the quickest toyota-branded production vehicle to date.

By defining specific performance and handling targets early in development, Toyota GAZOO Racing in Japan, with much input from Toyota Motor North America and Toyota Motor Europe, imbued the Supra with its own driving characteristics. While posting the kind of performance numbers that excite enthusiasts, the 2020 Supra will reward drivers of all skill levels with a thrilling sports car feel, even in everyday driving.
Toyota President and Master Driver Akio Toyoda tested the Supra on the Nürburgring and other racing venues to give his personal feedback as a Master Driver to ensure this new model would exceed the expectations of Supra fans across the globe. Supra devotees have waited a long time for the next-generation model. They’ll find the 2020 Supra worth the wait.

Shaped by Emotion … and Racing
The 2020 Supra embodies its rich lineage at first glance, with a design that shows a particular kinship with the fourth-generation Supra built from 1993-2002, as well as the landmark 1967 Toyota 2000 GT. The resemblance is more than skin deep: the new-generation Supra also shares with those notable models the common traits of a short wheelbase, sophisticated chassis, and high-performance inline-six-cylinder engine.

Toyota offered a glimpse of the new Supra’s design theme in 2014 with the dramatic FT-1 concept car that emerged from Toyota’s Calty design center in California. Supra’s striking exterior design was inspired by the FT-1’s expressive form. Optimization of the FT-1 design onto the efficient, high-performance packaging of Supra was achieved by condensing the forms, reducing unnecessary elements and further enhancing the dynamic and powerful character. It focuses on core Supra attributes, such as its inline six-cylinder engine and rear drive layout, while enhancing other features, such as stretching the hood to highlight the engine, creating a taut, but spacious two-seat cabin that helps accentuate an ultra-wide stance. The result is a look unique to Supra internally referred to as “Condensed Extreme.” 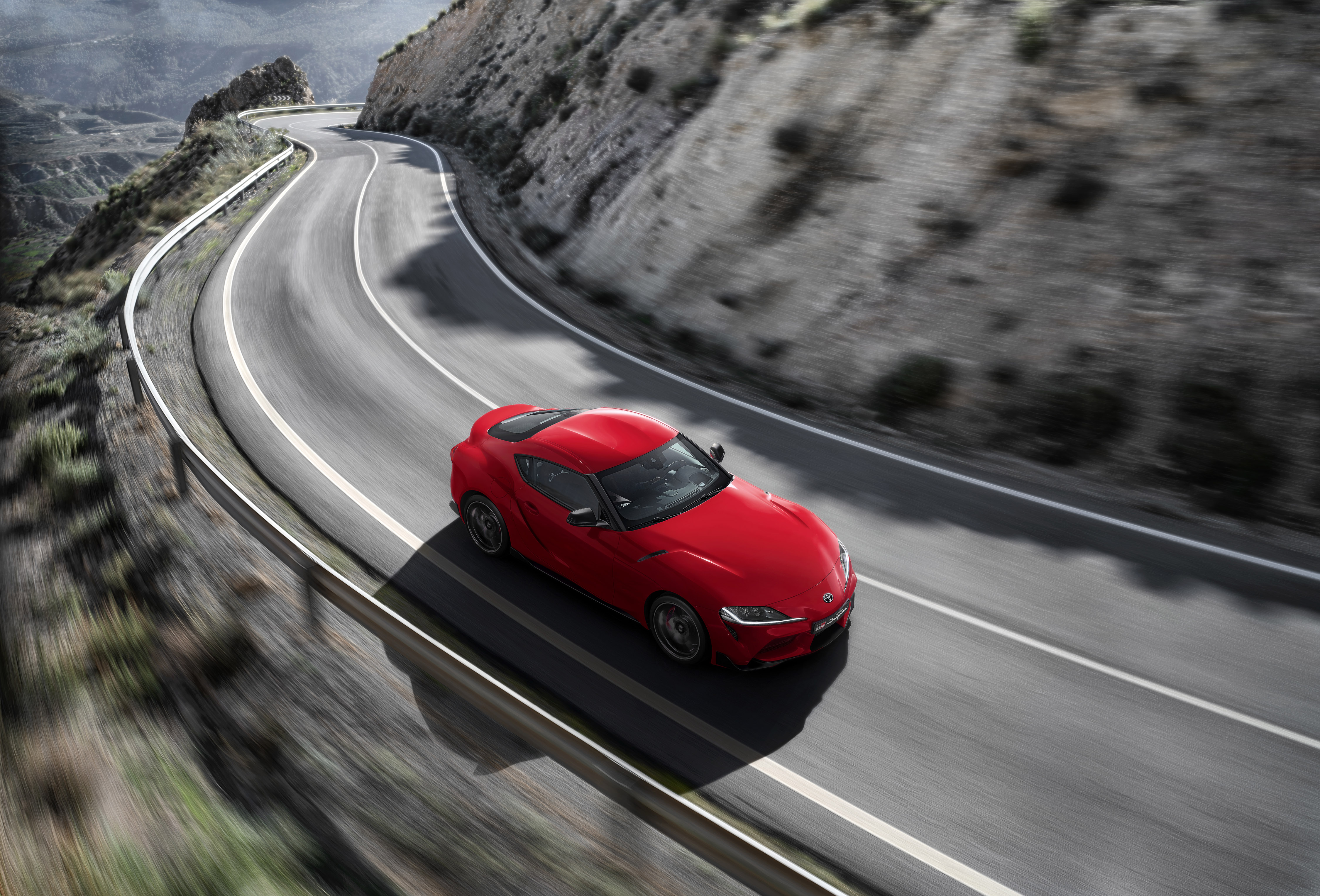 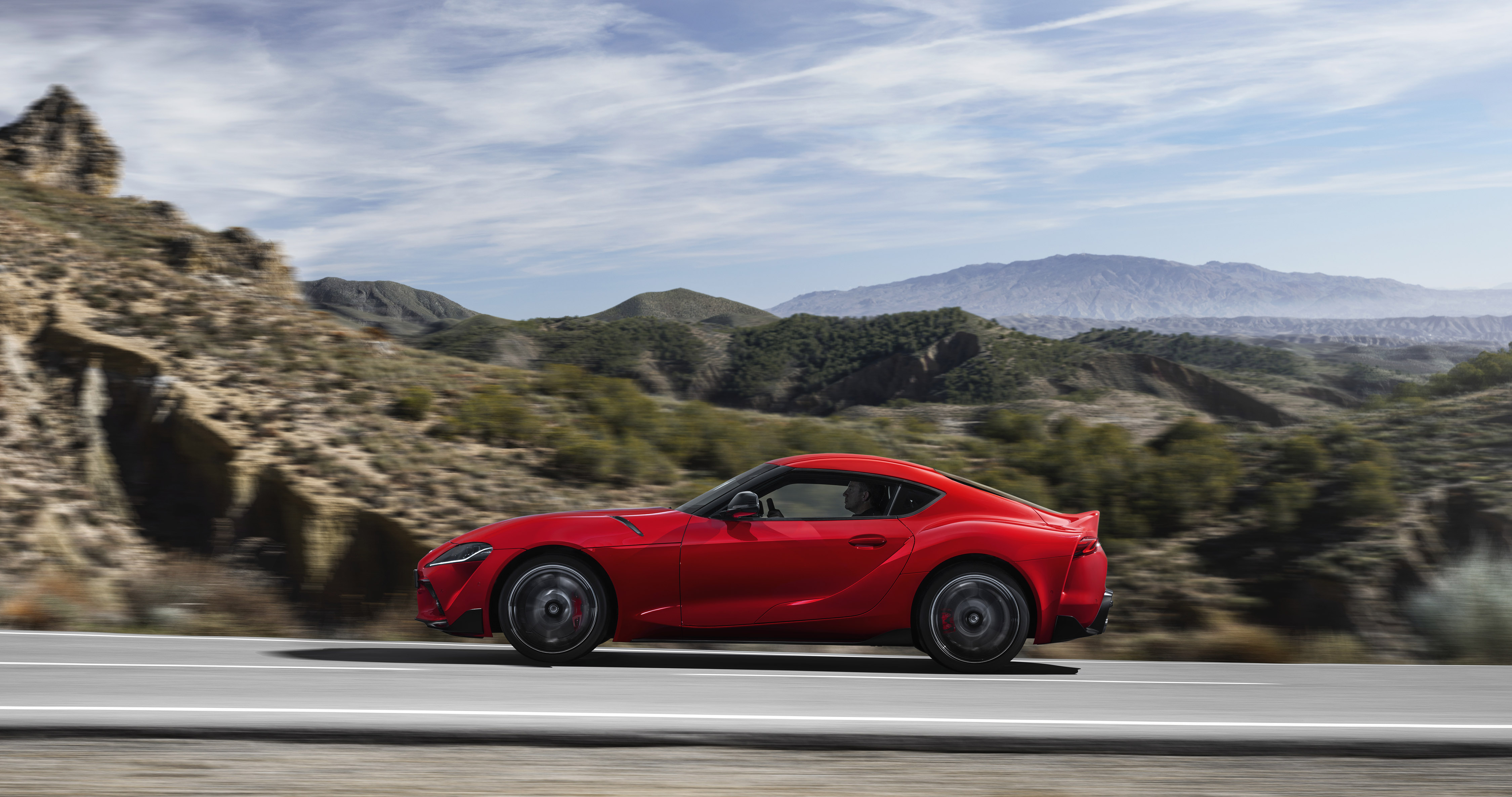 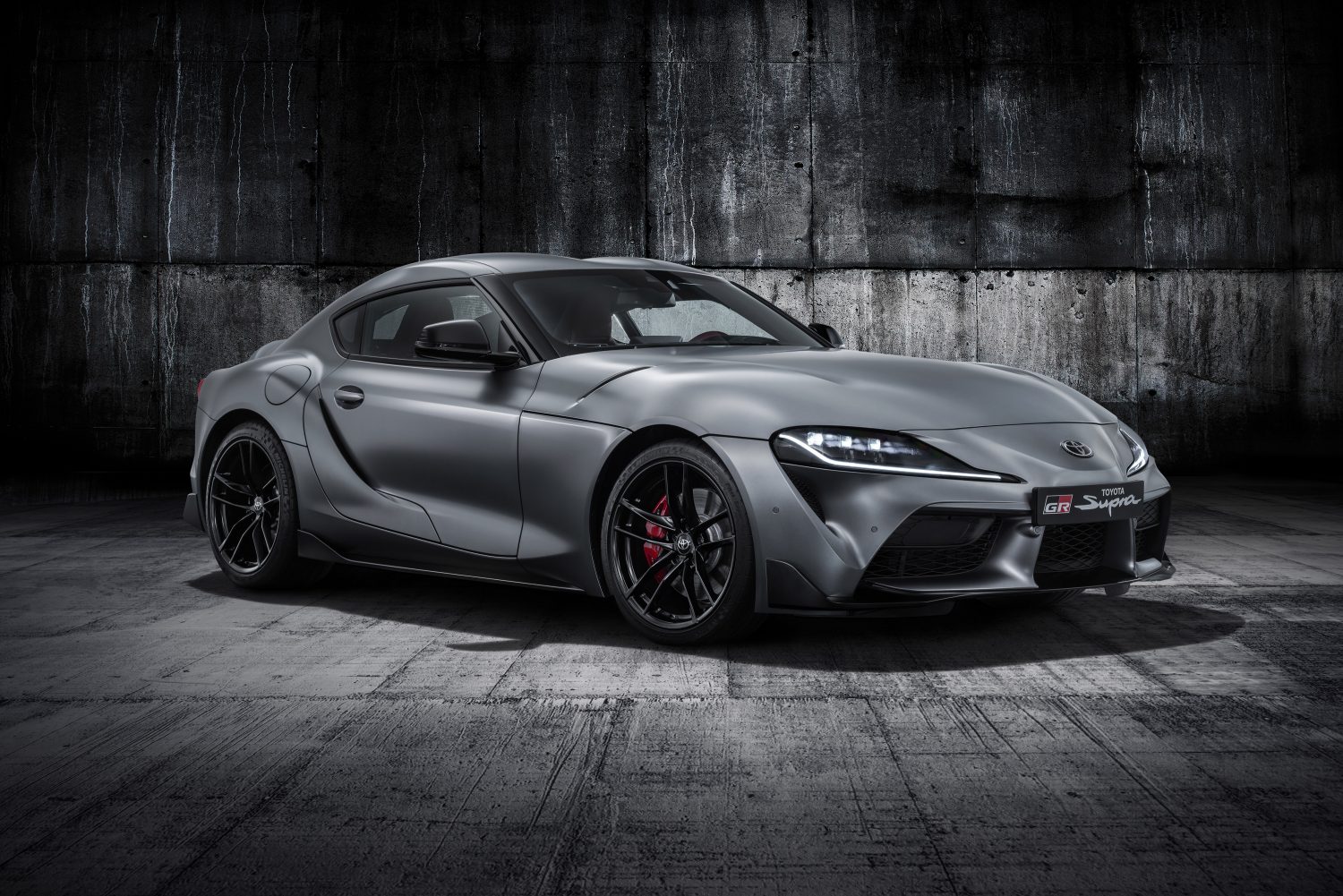 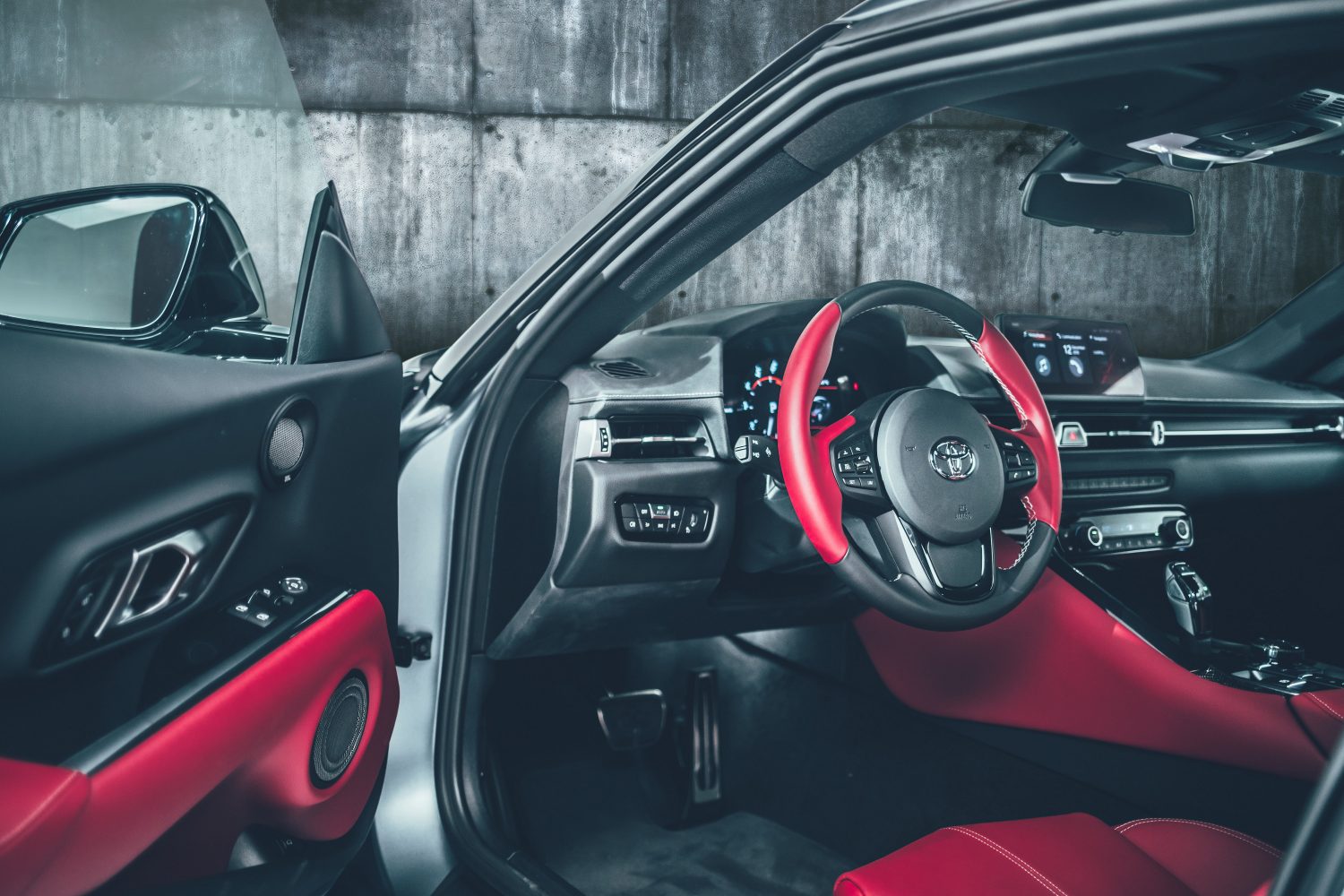