The Bentley Continental GT3-R is the most sporty Bentley ever so far. According to rumors this will change with an even more sporty version of the GT3-R but for now this is the fastest and hottest Bentley of the moment. The production of this model seems to be on steam.

It took a while before the first Continental GT3-Rs were spotted but last month up to eight copies are spotted in several cities. Bentley developed this car on the Nürburgring and the result is a Continental GT that lost 100 kilograms of weight, produces 580 hp and 700 Nm of torque. That's an extra 60 hp compared with the standard V8. Other technical adjustments are an improved gearbox with shorter gears and an improved suspension. The GT3-R is the fastest accelerating Bentley ever. The car needs only 3.8 seconds to sprint to 100 kph. A remarkable detail are the carbon fiber air intakes on the hood and the spoiler on the back. Bentley will build only 300 copies of this car to guarantee its exclusivity. 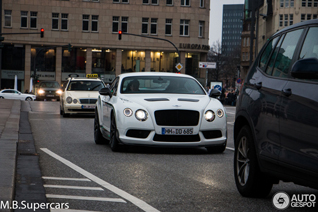