For a few years already Cadillac is trying to get a share of the market in Europe with their V Series. This market is dominated by the Germans. That's the perfect reason for Cadillac to extensively test their new ATS-V Coupé on German soil, the Nürburgring.

The Cadillac is almost ready for production and is in its final stage of testing. According to Cadillac this is the most impressive V Series model ever. It starts with the choice for a more lightweight V6 in the front which is powered with two turbos. This more lightweight engine will improve the handling of the car. With a power of 455 hp and 603 Nm of torque this is the most powerful six-cylinder engine in the segment. Customers won't have a restriction in the performance. The car sprints to 100 kph in 4.1 seconds and the top speed is 295 kph. Potential owners can choose between a manual six speed gearbox without launch control or an automatic eight speed gearbox with flippers behind the steering wheel.

The ATS-V is fitted with the third generation of Magnetic Ride Control and Performance Traction Management. Next to that, you can set the car in five different modes to give the car a different character due to adjustment to the stability systems. The spyshots show us the pumped up look of the ATS-V Coupé. A bigger front bumper, big spoiler and four exhausts are some of the elements that will make your recognize this model. 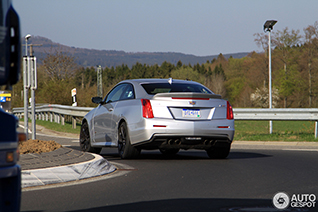 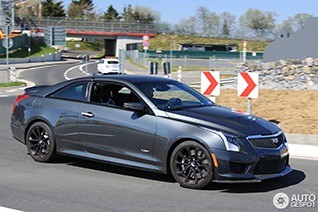