Spotter Kero is not a stranger on our front page, and once again he is delivering quality photos with this photo shoot of two Porsche GT3's. Two GT3's of a different generation, and the MkII is a GT3 equipped with the "Touring Package". The name "Touring Package" harkens back to a variant of the 911 Carrera RS from 1973. Instead of the fixed rear wing, when equipped with the optional Touring Package, the GT3 has an adaptive rear spoiler similar to that of the 911 Carrera models.

With the exception of the rear spoiler treatment, the body of the GT3 with the optional Touring Package remains unchanged. Like the other GT3 models, it is based upon the body of the 911 Carrera 4 model, which is 1.7 inches (44 millimeters) wider at the rear wheel arches. It sits about one inch (25 millimeters) lower than the 911 Carrera S. It also has large air intakes in the specially designed front fascia, as well as the air intake that is typical of the 911 GT3 model, located in front of the luggage compartment lid. In contrast to the other GT3 models, the front turn signal lenses and the taillights are not tinted. The 911 GT3 with Touring Package sits on forged center lock alloy wheels. At the front, 245/35 ZR 20 tires are fitted on nine-inch wide wheels, while at the rear 305/30 ZR 20 tires are mounted on twelve-inch wide wheels. Beneath its understated exterior is pure motorsport-derived technology: The four-liter naturally aspirated flat-six engine develops 500 horsepower and generates 339 lb.-ft. of torque. The 911 GT3 with Touring Package sprints from 0 to 60 miles per hour in 3.8 seconds and reaches a top track speed of 196 miles per hour. The Touring Package is available exclusively in combination with the six-speed manual transmission. 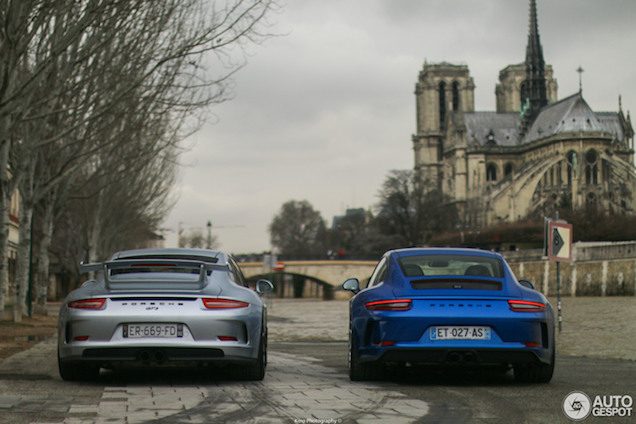