The current generation Dodge Viper is actually a very sophisticated car, if you compare it with the previous generation. Where the new generation is equipped with all technological comforts, the previous one is truly hardcore. Especially the Voodoo Edition, a special edition of the already special ACR, and even in Monaco it is stealing the show!

The previous generation of the Viper ACR was a raw and brutal race car. The 8.4-liter V10 produces a mighty 600 horsepower. To keep all this power on the road, Dodge added all kinds of aerodynamic components (including the huge rear wing) to generate a tremendous amount of down force. The Voodoo Edition adds additional cosmetic changes to the ACR. This edition served as a 'farewell edition' of the previous generation Viper. The Voodoo Edition was limited to 20 copies, one of which belongs to Dodge CEO Ralph Gilles. The special black finish, the Voodoo logo and the racing stripes are the only modifications, but despite that, the Voodoo Edition is quite special. The owner added some personal extras to the car (the race number and name of the rider on the side) that gives the car a bigger sense to the label ACR (American Club Racer). Great spot! 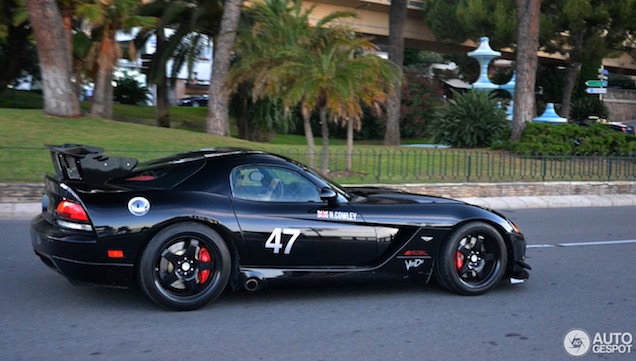