A license plate, registered in Dubai, F17, has been very popular in Europe for a while. This license plate was found on the only Gemballa MIG-U1 on the world. The most crazy project by Gemballa, ever. People in Dubai never drive long in the same supercar. Meanwhile we find the F17 license plate on another million dollar toy, an Aston Martin One-77.

Following combo will immediately be one of the most spectacular spots of this year. This isn’t strange, with twice a One-77 and a Mansory Stallone. The grey One-77 is the most interesting car of the three. We are talking about a One-77 Q Series. This is a series made by Aston Martin to make the One-77 even more exclusive, which is quite superfluous. The supercar is for sale at dealership Alain Class for a sum of three million Dollars! This is almost twice the original price. The car has a lot of carbon fiber in the interior, a red leather interior and some Q details. The exterior has some red details. Further, the One-77 has an HD camera to film you when you hit the track, special suitcases and unique forged wheels. Nothing’s changed on the engine of the One-77. The V12 produces 760 bhp and 750 Nm or torque. 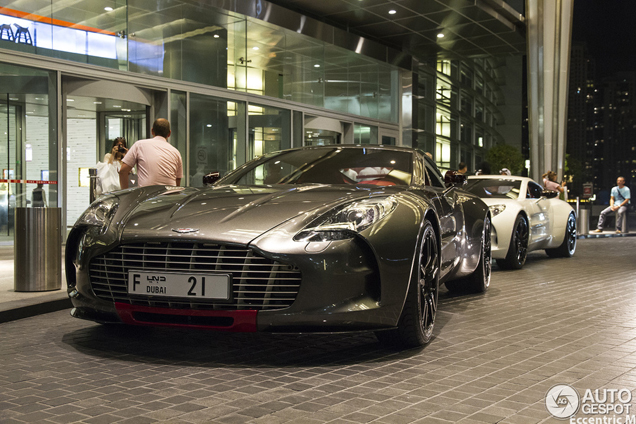