The Durango is no stranger for those that live in North America. Many Dodge fans have asked the question, why is there no SRT model for the Durango? That question is now answered by Dodge, because here it is, the Durango SRT! The Jeep Grand Cherokee and the Durango share the same platform and we knew it was just a matter of time that the SRT 475 hp V8 will find its way in the Durango.

With the proven 392-cubic-inch HEMI® V-8 under its new functional SRT hood, the new 2018 Dodge Durango SRT delivers 475 horsepower and 470 lb.-ft. of torque, and a wicked fast time on the drag strip – from 0-60 miles per hour (mph) in 4.4 seconds, covering the quarter mile in 12.9 seconds as certified by the National Hot Rod Association (NHRA).

The 2018 Dodge Durango SRT is powered by the potent 392-cubic-inch HEMI V-8 engine with Fuel Saver Technology that delivers 475 horsepower at 6,000 rpm and 470 lb.-ft. of torque at 4,300 rpm – providing America’s best horsepower and torque ratings and making the new Dodge Durango SRT the fastest, most powerful and most capable three-row SUV.

To keep the powertrain running cool and efficient in higher demand environments, a new cold-air duct provides cooler outside air into the engine. Testing has shown up to an 18-degree Fahrenheit improvement in intake air temperature, resulting in an engine that performs flawlessly on the street, racetrack or when towing a favorite trailer or toy. Assuring maximum performance under extreme conditions, the 2018 Dodge Durango SRT has been validated through rigorous 24-hour track durability testing – a testing standard that every SRT vehicle adheres to. 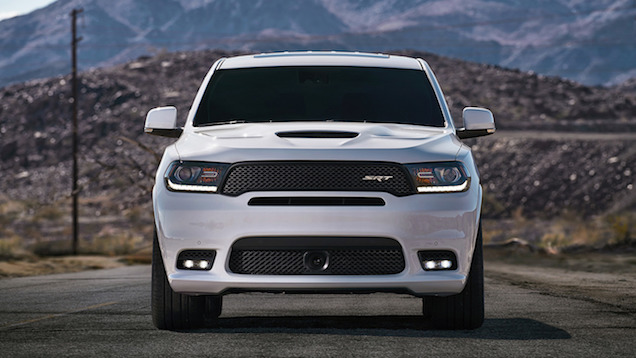