In 1965, Burkhard Bovensiepen founded Alpina Automobiles. Still, the car manufacturer is working in the same mindset as they always did and they’re still making BMWs more exclusive and unique. It’s unique that the company still follows the same philosophy after 50 years. In Geneva, they will celebrate their 50th anniversary with the Edition 50. The Alpina B5 as well as the Alpina B6 will be available as this limited edition.

Two models and both limited to only 50 copies. The renewed and more exclusive B5 Bi-Turbo and B6 Bi-Turbo are both powered by a 600 hp V8. That's more powerful than the current M5 which is less exclusive. The Alpina has a great performance on paper. The sprint to 100 kph takes 4.2 seconds and the top speed of the B5 is 328 kph while the B6 even reaches 330 kph. Both models have a mechanical limited-slip differential which makes it a perfect car for drifting. The chassis is a developed even further to handle this much power. New brakes give the Alpinas enough braking power to safely drive at high speeds.

Every model will be painted in Alpina Blue or Alpina Green. The exterior has the traditional Alpina Deco set with special Edition 50 letters on the exterior. The striping combines the heritage with the elegant look of the Alpina models. On the inside we find black leather seats with leather details in Forest Green. The stitching is coloured yellow to refer to the legendary B7 S Turbo Coupé from 1982. Everything is very retro and this matches Alpina's traditional style. 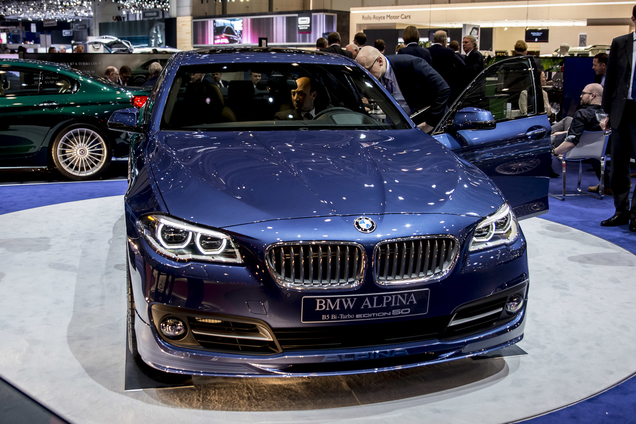