With a series of interviews we want to show you the stories from different countries on Autogespot. Spotters from countries like Puerto Rico, Morocco and Dubai tell us more about spotting in their countries. This time, we head to Lebanon, a country full of secret treasures!

I think that Autogespot is fantastic for putting together car spots all over the world which helps people see that even in unexpected countries, there are beautiful cars. I’ve had some experience but I’ve only started my own account recently whereas I used to send all the pictures I used to take to different pages. 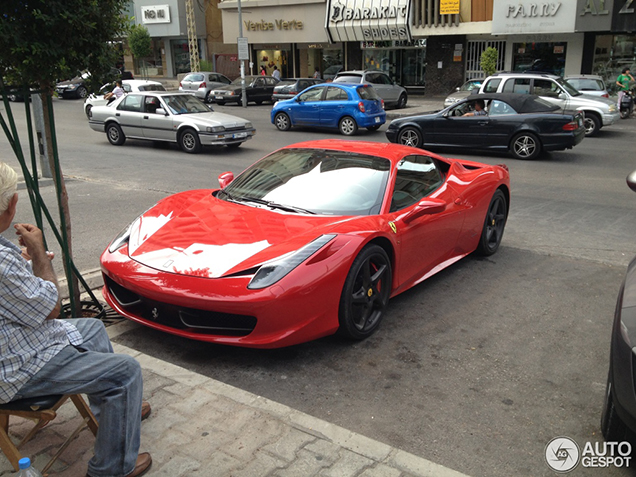 For the past 2 to 3 years, car spotting is becoming more and more popular in Lebanon. There are a lot of car fanatics but they don’t give the time to go car spotting themselves. I post pictures I have taken myself and also some pictures that are sent in to me. Even though I go on car spotting adventures, it’s not that easy to spot that many cars in Lebanon. I’m not saying that there aren’t any, but the owners just don’t use them as much as other owners in other countries do since the roads in our country aren’t that welcoming to the supercars.

In every country privacy and cars is an issue. How is dealt with this in Lebanon?

Well, owners of supercars do like their privacy but at the same time they love it when they see people staring at them as they pass by and take pictures. They prefer if the plates of their cars were covered once the pictures were posted on an automotive page.

When don’t know a lot about Lebanon. Can you tell us anything about this land?

Lebanon was known to be the “Switzerland of the middle east”, it mostly depended on tourism. The past few years, Lebanon has been facing a rough time because of what’s happening in the neighboring country Syria. Supercars were brought to Lebanon from all over the Arab world, they all came to see beautiful Lebanon, hope to see them here again soon!

How is car photography in Lebanon? Is car spotting just about making a picture of a car, or does it go way deeper?

Car photography is really important to some people here in Lebanon. I on the other hand, do it for the fun of it. I’ve loved cars ever since I was a young boy and as I grew up my love towards cars grew with me. Car spotting really means a lot to some people where they actually spend all their free time walking around trying to find supercars to take pictures of.

What kind of spots in Lebanon are the best to spot? Could you tell us something more about that?

Surprisingly, there are all types of spots in Lebanon. When people visit my page they don’t believe that the cars I post are in Lebanon. Lebanon is home to plenty of absolutely stunning cars!

Are there special places where they like to come. In a city like Monaco people love to show off during the day. Do you have these ‘traditions’ in Lebanon?

The best places to spot cars would be in Downtown Beirut, The bay area, and The Marina. Supercar owners usually like taking their cars their because of how beautiful those locations are. What fits a perfect view better than a perfect car?

In every country, certain cars are very popular. Which cars are in Lebanon very popular? Do you see many tuned cars?

There are plenty of Ferraris and Porsches in Lebanon, two of the most common Ferraris are the Ferrari 458 and the F430. Porsche on the other hand, is extremely popular. Most tuned cars in Lebanon are Mitsubishi Evolutions and other old BMWs like the E30.

For one the car is just something to travel in, for another person it reflects their status. How do people in Lebanon feel about this

A lot of people in Lebanon don’t appreciate the beauty of the cars that are here. While a whole lot of others love their cars more than they love themselves. Just like any other country, there are those who have a passion for cars and those who just don’t care.

Does there exist something like an Lebanon petrolhead? How would you describe such a person?

There are plenty of Petrolheads in Lebanon. In short, a petrolhead is someone who’d choose a car over anyone else. That’s what I would personally do. In my opinion, a car is a mans best friend because it’s always there and has exactly what the man needs. Especially if it’s a supercar.

Do you have some proper roads for driving? Can you tell me something about them?

There are some of the best roads for fun drives here in Lebanon. There’s a highway leading from the capital Beirut to the mountain and throughout the whole way, the road is perfect and the view next to the car would be even more beautiful than the car itself! There are a few long roads that are perfect for road trips.

What do you expect the coming years? Do you think there will change much in comparison with the current situation? Do you expect more exclusive cars?

In the next 2-3 years, we expect to see a lot more supercars and hypercars here in Lebanon. We already know for a fact that there will be 2 LaFerraris coming to Lebanon permanently soon! If the situation in Lebanon get’s better, the cars that used to come in the past will come back again to see how beautiful this country is. Mostly cars from the Gulf area like Dubai, Qatar, Kuwait, KSA will be coming if the situation becomes stable.