Is the Mercedes-Maybach G 650 Landaulet really that impressive?

When this car was launched it was received with a lot of skepticism. The world's most expensive SUV made its world debut at the 2017 Geneva auto show and only 99 copies will be made. Middle Eastern customers will most likely buy the majority of the production, especially since the car will not be sold in the Americas. The price tag is €630,000 (about $666,400) and that is about €400,000 more compared to the G500 4x4², the most expensive G-Class currently on offer. The question: Is it that impressive?

This Landaulet's exquisite character is emphasized by the high-grade design upholstery with diamond stitching, which is in all cases two-tone and available in four trim colors. Customers can choose between three different matching colors for the fabric top as well as four attractive design paint finishes, including a matt finish. "V12 BITURBO" lettering on the front wings points to the ultimate in motive power, the 12‑cylinder engine. The radiator grille features a chrome-plated double louvre and a chrome-plated screen. Exclusive "LANDAULET" lettering is worked into the rim flanges of the ceramic polished, 55.9 cm (22‑inch) 5‑twin-spoke light-alloy wheels. Electrically extending entry aids make for easier access to the vehicle. Other exclusive exterior design features include front and rear under-ride guards, large wheel-arch flares in genuine carbon fibre as well as, mounted on the right at the rear, the spare wheel with integral holder for the third brake light.

Positioned in front of the cup holders is a control for the rear air conditioning. Further forward is a "G cockpit" in the style of the driver's instrument panel. The centre console houses the three distinctive, centrally placed pushbutton switches. These switches are not used to operate the three differential locks, however: one switch is for the interior lighting, while the other two are used to open and close the soft top. The rear "G cockpit" also includes two glove compartments as well as grab handles typical of the G‑Class. The cross-member, which also holds the glass partition, accommodates two 25.4 cm (10‑inch) high-resolution media displays of the Individual Entertainment System.

High drive comfort comes courtesy of the most powerful available engine, the Mercedes-AMG V12 biturbo, which delivers a maximum output of 463 kW (630 hp).

So all this...is it impressive? We are interested to hear what your verdict is. 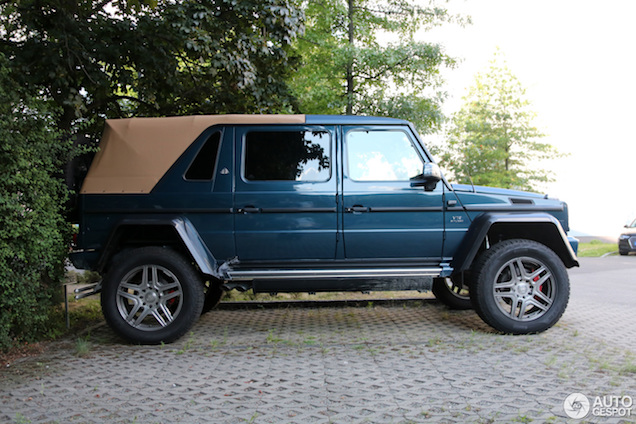