Italian elegance in Moscow, who thought that this was possible? Many of you think of outstanding creations like the TopCar Stingray GTR, the Mercedes-Benz WALD S-Klasse or the Lamborghini Murciélago Roadster BF Perfomance when we talk about Moscow. The 612 Sessanta which was spotted does stand out but not as much as the examples above.

When we look at the car it looks like it has two colours. Bianco Avis and Nero, but that is not correct. The car has the dark pink red paint, possibly Vinaccia. Though we can't confirm this due to the light. When you know it for sure, please let us know! The 612 Sessanta isn't very new anymore. The car is almost five years old. The car was presented in June 2007 because of the sixtieth anniversary of Ferrari. The model stands out because of the two-tone colours. Only sixty loyal Ferrari customers got the keys of this V12 Granturismo. Some extras of this model are the panoramic roof, luxurious interior with a TV-function and chrome rims. Small logos in the car show us that we’re dealing with a very exclusive model. 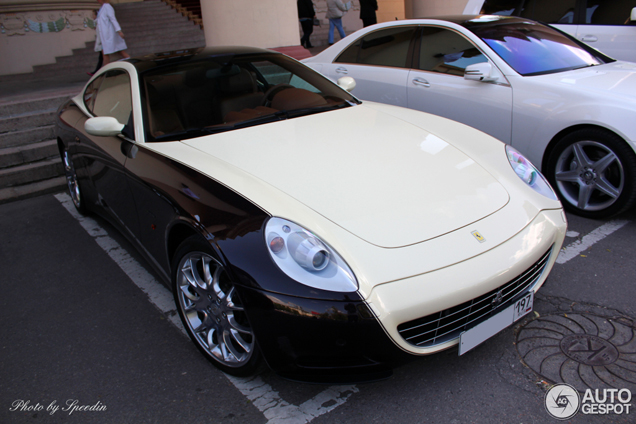