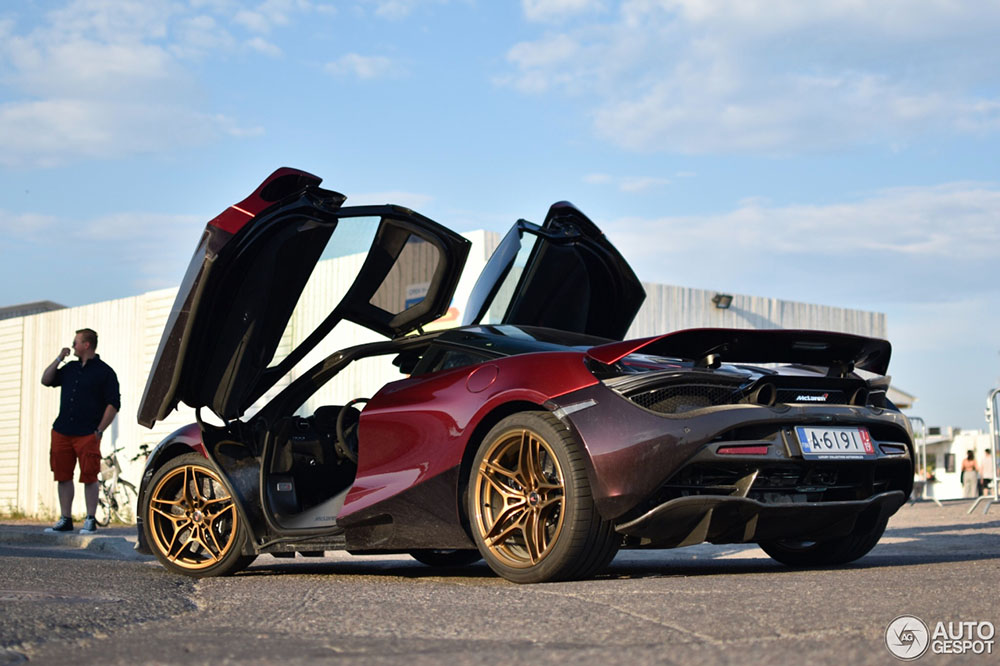 It took a while for the car to be spotted, so finally here it is, the McLaren 720S Velocity. The McLaren 720S ‘Velocity’ by MSO signals the almost limitless scope of personalization possibilities available to buyers who opt to commission their new Super Series car from McLaren Special Operations, the bespoke vehicle division of McLaren Automotive.

The striking ‘Velocity’ paint theme comprises two pearlescent hues of red; a newly formulated shade, Nerello Red, is used on the front and upper body panels of the car – including on the red-tinted visual carbon fiber hood – and fades into a vivid Volcano Red that covers the sides and rear of the car. The unique paintwork is complemented by lightweight alloy wheels, finished in a subtle shade of metallic bronze by MSO. A range of exterior carbon fiber parts selected from the MSO collection also features on the 720S ‘Velocity’, further enhancing the bold and purposeful appearance of the new Super Series. In addition to the red carbon fiber hood, a gloss carbon Rear Deck Vent, gloss carbon Service Cover, gloss carbon rear aero bridge and satin carbon Full Length Sill Cover are also fitted.

Step inside the spacious, light and airy cabin of the 720S ‘Velocity’ and you are greeted by Carbon Black Alcantara® trim throughout, providing a technical, sporting feel with a luxurious tactile finish and contrasting with Harissa Red leather details. Complementing the exterior ‘Velocity’ theme, Harissa Red highlights are continued throughout the interior, including on the fascia, steering wheel, doors and across the sports seats fitted as standard on the 720S, further enhancing McLaren’s most luxurious Super Series interior to date. The McLaren 720S ‘Velocity’, which as a complete vehicle costs in the region of £335,000 ($410,000 USD) as a McLaren Special Operations commission, is one of five MSO themes for the new McLaren Super Series that are explored in a boutique area of the McLaren stand at the 87th Geneva International Motor Show. The other themes, ‘GT’; ‘Pacific’; ‘Track’; and ‘Stealth’, are displayed on screens, further demonstrating that MSO can fulfil almost any request to ensure that each personalized McLaren perfectly delivers the customers’ initial ideas and vision.