Just like Lamborghini, McLaren also celebrates its fifty-year anniversary this year, and of course not simply. Manufacterers take any chance to make a limited edition of a car nowadays, and so does McLaren. What this special edition is about, hasn’t been revealed yet, but the information they gave us sounds very promising!

To start, a set of bumpers made by the McLaren Special Operations team will be made, which is partly made out of carbon fiber and kevlar. Also carbon ceramic brakes will be standard, which will take place behind specially designed wheels, these wheels are each 500 grams lighter than the optional superlight wheels. On the inside, things became very luxurious. Everything is finished in leather, with some sporty details finished in carbon fiber to variate. To remember the fact of the anniversary, a plaque will be placed inside the car saying this is a special edition.

The number of cars they will produce is fifty closed ones and fifty open versions. They will be available in Carbon Black, Supernova Silver of McLaren Orange. On the 2nd of September, McLaren celebrates the occasion, and on this date the car will be presented! 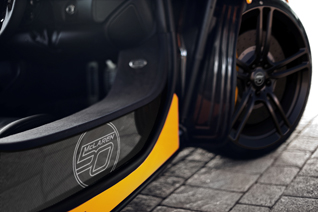