There are three types of car fanatics. The Japanese fanboy, the American Muscle fanatic and the Exotic and supercar lover. Hold on, I'm not trying to offend you. Fact is that everybody has a different taste. What's better than uniting all these tastes in one shot. That's exactly what happened in Toronto, Canada.

First of all we see an Italian stallion on this shot, the Ferrari 458 Italia. The 458 is a car that will satisfy most of the supercar fanatics. The naturally aspirated V8 produces 570 hp but the best thing of this engine is its sound. The new 488 GTB sounds more tame due to the added turbos so the sound of the 458 Italia is something we should cherish.

When we look at one of the other two cars we see a deep black Nissan GT-R R35. This GT-R is equipped with a bodykit and a new set of wheels. Of course it's always hard to find out how much power is hiddend under the bonnet of the GT-R because it's so easy to tune this car.

Eventually we also see some American musle power. The Corvette is an icon just like the Camaro and Mustang. Of course this car is powered by a big V8 engine. The only question left: which car is your favorite? 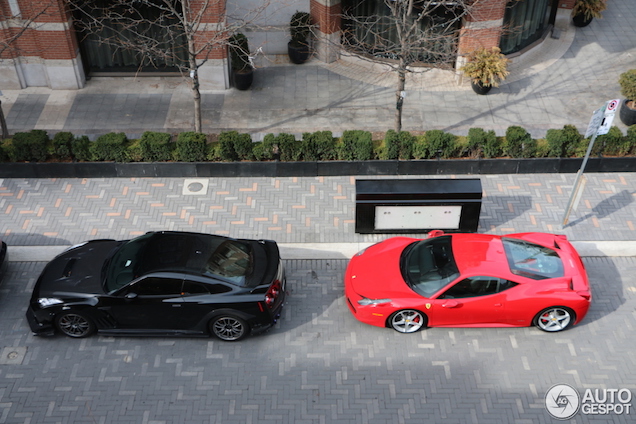