This is not your "average" 991 Turbo S with some additional features, no this is the 991 Turbo S Exclusive Series spotted in Monaco! With a sticker of +$250K it is more expensive than a GT3 RS, and you for the same money can actually a GT3 and a "standard" Carrera 4S. The Coupe makes 607 horsepower and is limited to 500 units worldwide. In addition to an increase of 27 horsepower, the 911 Turbo S Exclusive Series distinguishes itself from other 911 Turbo S models with its unique design, specialty materials, and luxurious details.

The Exclusive Series is being meticulously finished by hand in the new Porsche Exclusive Manufaktur at Porsche AG's headquarters in Stuttgart-Zuffenhausen. Previously known as "Porsche Exclusive," the in-house workshop specializes in customization and is responsible for limited-edition vehicles. For the first time ever, Porsche customers can have the optional matching chronograph from Porsche Design configured in the same specification as their car.

The 3.8-liter, twin-turbo flat-six engine with a power kit delivers a maximum torque of 553 lb.-ft. between 2,250 and 4,000 rpm. This results in the 911 Turbo S Exclusive Series Coupe accelerating from 0 to 60 mph in 2.8 seconds, and it takes 9.6 seconds to cross 124 mph making it 0.3 seconds faster than the standard 911 Turbo S. The top track speed is 205 mph. The 911 Turbo S Exclusive Series comes standard with 20-inch center-lock wheels painted in black, with highlights carefully finished in Golden Yellow Metallic using a new laser technology. For the first time, the brake calipers for the Porsche Ceramic Composite Brake (PCCB) system are available in black with the Porsche logo in Golden Yellow Metallic. The active sports chassis with Porsche Active Suspension Management (PASM) and the Sport Chrono package are included as standard. Rear-axle steering and Porsche Dynamic Chassis Control (PDCC) further enhance handling and stability.

What makes the 911 Turbo S Exclusive Series Coupe so distinctive is the exclusive Golden Yellow Metallic paint finish and various carbon fiber components, including the front trunk lid, roof, and side skirts. The two carbon-weave strips that contour the roof and front trunk lid accentuate the sporty look of the car. The rear view is characterized by the rear wing of the Turbo Aerokit, a new rear fascia, and the exhaust system with twin tailpipes which are finished in black. The fenders are decorated with Porsche Exclusive Manufaktur plates. In addition to Golden Yellow Metallic, the vehicle is offered in other select exterior colors. 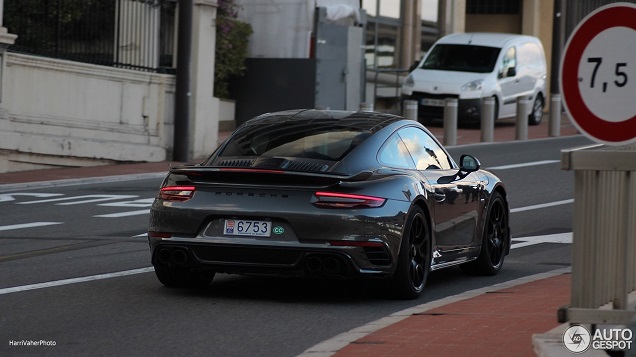