Salon Privé. One of the most prestigious events on the year. This year, the 8th annual event, was no different featuring cars from some of the worlds most famous and exclusive Marques and coachbuilders.

The event was spread over three days. The concours de elegance, ladies day and most exciting of all, supercar Friday! Upon a damp and rainy arrival on the Friday the cars lining the entrace to the car park immediately impressed me. A 997 Porsche 911 GT3RS rested alongside a Rolls Royce Wrait, Bentley Continental SuperSport. A heavily modded 458 Ferrari and some sort of road going racecar that made my back ache just looking at the thing.

Armed with and oversized umbrella, press pass and weather-sealed cameras I emerged from the entrance tunnel and onto the green pastures of Syon House, a very befitting venue for the event. The sight I was faced with was not one to be forgotten! To my left a Ferrari FF and F12 speckled with drops of rain. Looking past this duo a stunning Mercedes-Mclaren SLR 722 being guarded by an all black Bugatti Veyron. I was in for yet another shock as my eyes peered past the brutal duo, met by a stunning regal red Pagani Huayra being flanked by a Koenigsegg Agera and traditional Rosso-Corsa Ferrari Enzo.

Panning further across the green I was encountered with the sight of the epic VUHL 05, a couple of stately Rolls Royce and a small bundle of bizarre concepts. Further along much more classic metal was organised neatly in a scientific grid system, a Lamborghini Countash, Ferrari 255GTO and 250SWB being the highlights.

I was then grabbed by a member of Salon Prive staff who escorted me to the world premiere of the sublimely designed Spyker B6 followed by the incredible Icona Vulcano, a brand new €3million euro hypercar. Then came the press meeting with the KAHN rivals, Clark Abel, who showed off a very special iteration of their tastefully modified Range Rover Evoque.

As the afternoon approached the weather began to improve and the sun began to dry the cars and allow some of the older cars to make an appearance from under their covers, the main attraction being the legendary McLaren F1 GTR race car. The supercar parade followed, a chance to see the speed machines in action as they revved and roared there way around the path of Syon House before the show came to a close.

Salon Privé is a show that always attracts the latest and greatest metal to its annual events and will continue to be a favourite with enthusiasts for many years to come! 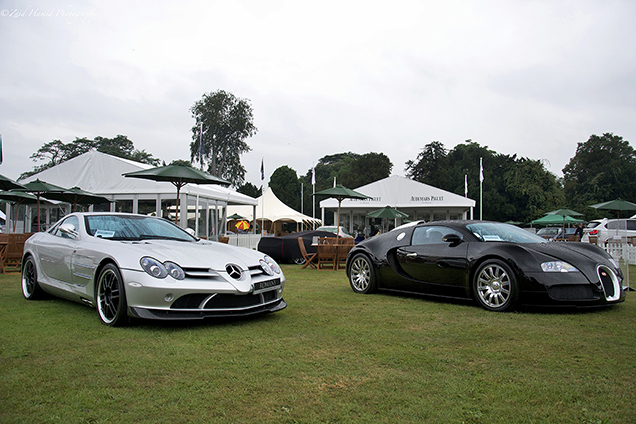