Scottsdale is the scene of a bizzare combo

Combos, we really love them. A crazy combo in Monaco isn't that special anymore but we do get very happy when we see a combo like the following one in Scottsdale. We see a blue Gemballa Mirage GT together with a Porsche 918 Spyder and a Hennessey Venom GT. Next to that we also see a blue Ferrari and a Rossion Q1, an orange brute of which we don't know that much.

Uwe Gemballa is probably so famous because of his Gemballa Mirage GT. The clean and peaceful look of the Porsche Carrera GT was transformed into a brutal supercar. The blue copy on the photos looks extraterrestrial with its yellow details. At the back, which unfortunately can't be seen on the photos, you will find four enormous exhausts which create the lovely soundtrack of the V10. Gemballa also tuned the engine of the Carrera GT. The power was boosted from 612 to 672 hp thanks to a new exhaust system. Nowadays this isn't that powerful anymore but eight years ago this was an incredibly powerful car. With only 25 produced copies this car is a real rarity. 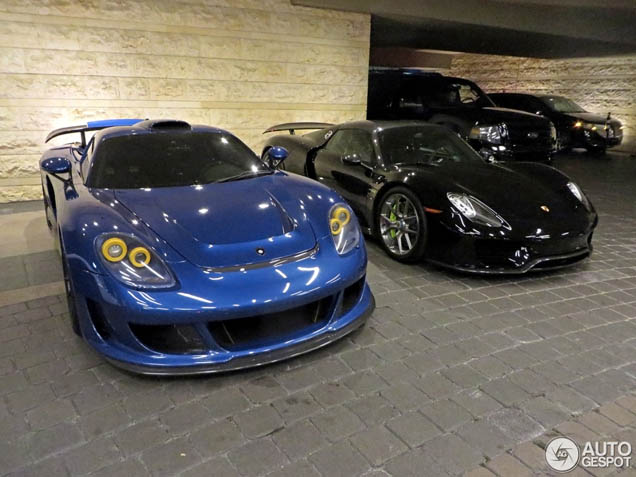