Exclusivity in China has no limits. For many, a normal Ferrari 458 Italia isn’t exclusive enough. That’s why Ferrari made twenty limited 458 Italia’s especially for China. This car got the name 458 Italia Dragon Edition and finally one of these twenty copies is spotted!

The Chinese petrolheads are spoiled by luxury and sports car manufacturers. Rolls-Royce keeps on building limited editions and yesterday we already showed you the Bentley Mulsanne Four Season Edition. Even in Maranello, they spoil the wealthy Chinese with limited models. A few Special Projects already found their way to China and last year, Ferrari built the 458 Italia Dragon Edition. A car to still the hunger for the most exclusive and expensive cars.

Ferrari painted the Dragon Edition in a new colour named Marco Polo Red. The entire theme on the car comes from Longma, a fabled winged horse with dragon scales from the Chinese mythology. The car is filled with details of dragons which are handmade in golden paint. The interior has golden stitching and dark red carbon fiber. The special car was spotted in Shanghai which is the same place where Ferrari made the official press photos of this special edition. 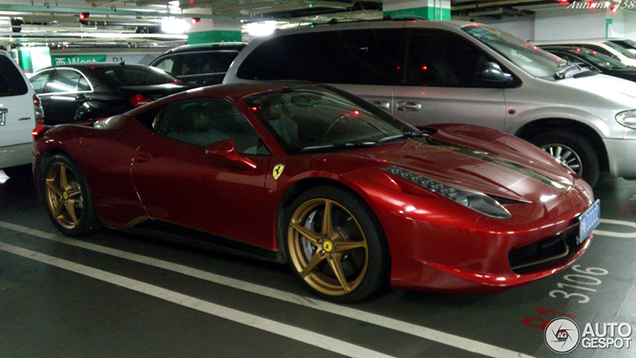