In Dubai you will have to try very hard to stand out with a car but it's doable with a bright yellow Gemballa Mirage GT Black Edition. ErikG_NL managed to spot this extremely rare creation by Gemballa, based on the Porsche Carrera GT during a visit to Dubai. Gemballa became famous thanks to there extreme creations based on Porsches. In 2010, the company made a restart after the death of CEO Uwe Gemballa in South Africa. Luckily his brutal creations are still being spotted every now and then.

Only a few copies of the Black Edition are built and they all have a different colour configuration. Compared with the 'normal' Gemballa Mirage GT, the Black Edition has a black interior, black wheels and several other black details. The adjusted exhaust system creates a lovely soundtrack, but let's be honest, the sound of the standard Porsche Carrera GT is already phenomenal!

Like we're used to from Gemballa, the Carrera GT also got a power boost, the power is increased to 650 hp and 630 Nm of torque. This makes the Mirage GT 0.2 seconds faster in a sprint from zero to 100 kph. It now takes only 3.7 seconds to do this. The sprint from zero to 200 kph takes only 9.7 seconds and the top speed is around 335 kph, quite impressive! 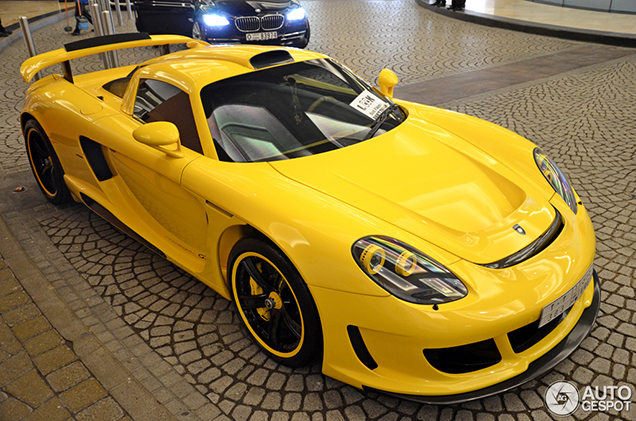