With only a few months to go before the launch of the Ferrari F70, Ferrari has to test the F70 on the streets, which they have been doing a few times already. But with the many tourists walking around in Maranello they cannot drive about unnoticed. Some spyshots of the car have appeared and they might start the horsepower wars again. The rumour has it that the engine of the F70 will hit the streets really hard.

The rumour has it that the engine of the F70 will produce more then 1000 horsepower. The V12 will remain in the back and it will sound more like a Formula 1 car than like a normal roadcar. Sounding at least like the Ferrari 599 GTO would be great. The V12 will probably be supported by a hybrid engine but it is still unclear whether it will only support the rear wheels or also the front wheels. Everything is possible so far. The design is still unclear but according to these shots it will be similar to the previous Enzo but with the design style of the F12berlinetta and the 458 Italia. 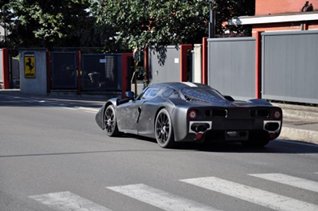