Last week, Tesla Motors organized a meeting for their shareholders and press. They had something new and Elon Musk, CEO of Tesla Motors, already released a small hint last week. Elon Musk introduced the Tesla Motors Model S P85D. A very fast sedan which can compete with many sports cars.

The standard Model S was already fast. You will have a lot of torque immediately when you accelerate and the electric engine produces up to 476 hp. With the P85D, which will be available at the end of this year, Tesla added another extra electric engine which produces an extra 224 hp. This is possible without reducing the driving range of the car. Instead of 458 kilometers, the P85D can now drive up to 442 kilometers. A reduction of only 26 kilometers.

Than the more fun details about the P85D. The Tesla sprints to 96 kph in 3.2 seconds and this makes it faster than a Ferrari 458 Italia for example. Tesla wants to show the development with this P85D. The development for electric driving goes incredibly fast.

Another new option of Tesla is the autopilot. A function which keeps you on the streets by monitoring the streets. This is done with a camera which uses a sonar to look all 360 degrees around the car. This makes it possible to read traffic signs and adjust speed to upcoming situations. The system also keeps in you within the lines of the road and keeps enough distance to the car in front of you. Quite an upgrade for the Model S! 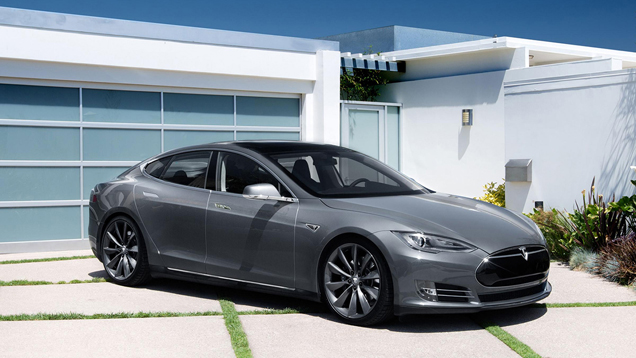