The Vauxhall VXR8 Bathurst, a rare and brutal monster

The name VXR8 Bathurst really suits a though-looking and raw car. Not surprisingly, this is how the four-door sportcar by Vauxhall looks and feels like. This car is built in a limited number and is a hommage to the Bathurst circuit in Australia. Surprisingly, the first copy was spotted in Europe and not in Australia.

Spotter GTRJacko was able to catch this red monster in the city centre of Leeds. It is not just a car which you pass by unnoticed. The colour and wider bodykit with a different spoiler immediately catch attention. When the car appears driving, you will also remember the impressing soundtrack for a long time, provided by an enormous Walkinshaw Performance 122 Supercharger and of course the V8 itself. With these features, the exhaust can produce over 100 decibels of sound, which is only twenty less than a rock concert! The V8 is as powerful as the Lamborghini Gallardo LP560-4, BMW M5 F10 and Audi RS6 C7, but these cars are way more expensive. The VXR8 Bathurst is a car for real enthusiast who love to go sideways and bring out their inner child. For the impression of the car, you can watch the video below, in which Top Gear drove the car. 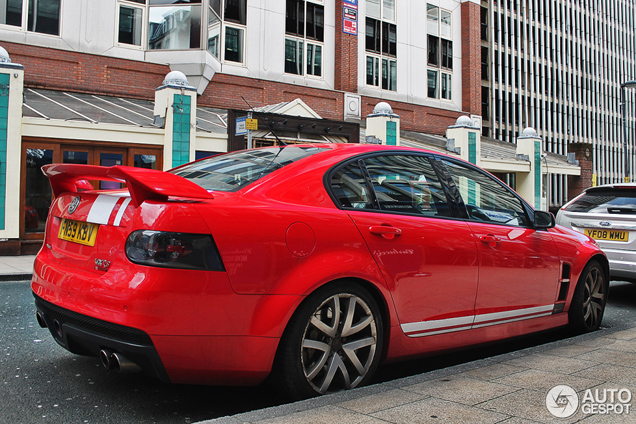