In this new series, we are visiting exotic car dealerships all across the United States. Our first stop was at Naples Motorsports, located right in the heart of Naples, Florida. We sat down with the owner, Todd Rosenthal, and the General Manager, Robert “Bobby” Joyce. There is a good reason that our first stop was at Naples Motorsports. It has been a pioneer in the exotic car business with many ‘firsts’.

Naples Motorsports has become its own brand, and considered a leading innovator in the Digital Age of car sales. The website, with detailed photography of all the cars for sale, and the inventory section with both “current stock” and “recently sold” cars, were ground breaking in the early days of the internet. Even today Todd is a ‘consultant’ and helps other exotic car dealers to bring innovation into their business. 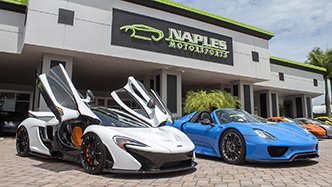 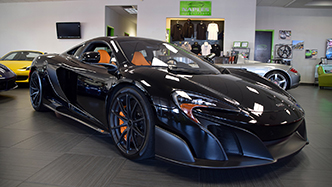 Todd has an eye for detail, and it truly sets Naples Motorsports apart from many other car dealers. When Todd is buying a car for the inventory, his passion and love for cars comes to life! Todd personally inspects all cars before he decides to put them on the showroom floor. Good luck finding any flaws on the cars, because there simply aren’t any. It is part of the overall philosophy at Naples Motorsports and it became very clear from the moment we sat down, how much passion the dealer has for service. Service is not just a department at Naples Motorsports where they repair and maintain cars; it is an attitude that Robert and Todd are safeguarding each and every day. 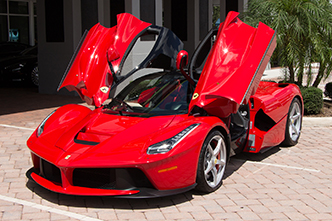 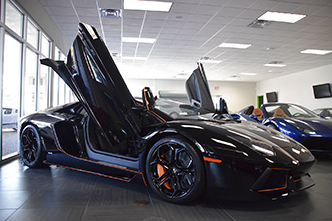 Naples Motorsports buys their low mileage and exclusive inventory from exotic car owners and at times (new cars) directly from the factory dealer. As an independent dealer, Naples Motorsports sells any exotic car on the market today, including the holy trinity, the McLaren P1, the Porsche 918 and the Ferrari LaFerrari. At the time of our visit Naples Motorsports had a LaFerrari for sale (with only 55 miles) for a whopping $4.55 million dollars, the fourth one that was being sold by the dealer. Not bad, if you consider the fact that only 120 copies were sold in the entire United States. A majority of the cars were sold to customers right there in South Florida. With winter temperatures in the 70’s and 80’s and 265 sunny days a year, you can drive your exotic car all year round, except for the days when there is an occasional tropical storm. Naples has the second highest number of millionaires per capita in the US. You notice this when you visit downtown Naples where an abundance of exotic and luxury cars are cruising up and down 5th Avenue, the other 5th. Many of the cars you see were purchased right here, at Naples Motorsports. 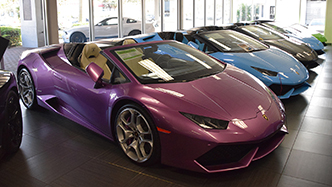 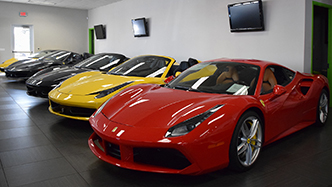 Among the customers are car collectors, celebrities and movie stars that put their trust in Naples Motorsports. In 2016 Naples Motorsports sold well over 400 cars, ranging from the Bentley Continental to the Porsche 918 and Ferrari LaFerrari. There were well over 80 exotic cars on the showroom floor and parked outside, including the rare Ferrari 599 SA Aperta with a sticker of $1.5 million. About half of the sales have always been Ferrari, but with exploding sales of McLaren and Lamborghini, Todd starts to see that percentage drop and sales shifting to other brands.

As of 2017 Naples Motorsports has become an official Spyker dealer in the United States. It was pretty awesome to see the C8 Spider parked outside, waiting for its customer to drive it home. During our visit Todd was texting back and forth with Victor Muller to break the exciting news. It was not the first time that Naples Motorsports was interested in becoming a Spyker dealer, and this time Spyker Cars got it right. We are positive that the addition of Naples Motorsports to Spyker’s dealer network is a step in the right direction!