Some tuners think too much power is impossible. Mercedes-Benz just released the C63 AMG Black Series Coupé and tuner Väth already gives it a power boost. By using a supercharger, a massive 762 bhp is realized from the 6.2 liters V8. The standard 510 bhp looks like nothing now. This upgrade costs 32.000 pounds, but this isn’t the only thing which can be modified by Väth.

The already low Mercedes-Benz C63 AMG Coupé Black Series can be lowered 20 to 65 millimeters if you want to. How to drive over speed bumps is a big mystery, but it surely looks good. You’ll go from 0 to 62 mph in just 3.6 seconds, half a second faster than its standard brother! Better brakes also can be fitted just like a black star in the radiator grille. The speed-o-meter is replaced for one with 250 mph as the biggest number, the top speed will surely be more than 220 mph. Madness to the max! 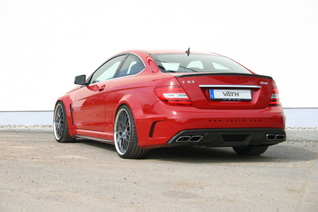