Lancia is no longer the brand it once was. The only model Lancia is currently selling is the Ypsilon, and that car is only sold in its home country of Italy. And that is unfortunate, because the brand has such a rich history. Lancia's greatest feats are in rally sport. The brand is the most successful one in the WRC history. And this Delta Integrale, spotted Monaco with a rally livery is a perfect memory of the once legendary brand!

The Delta was revealed to the public in 1979, and it was the first compact "middle class" car of the brand. The car was the result of the joint development between Lancia and Fiat, and the Delta shared most of the platform and technology with the Fiat Ritmo. The real difference was the interior, that was more sporty than its Fiat cousin. But Lancia took the Delta and constructed the impressive HF Integrale.

This variant was a derivative of the Delta that Lancia (successfully) used in Group A of the WRC (World Rally Championship). Four wheel drive and power ranges ranging from 185 hp for the 8V, to 215 hp for EVO II formed a perfect base for the rally car. The strongest variant top speed was 218 km/h (130 mp/h) and the car accelerated in 6.4 seconds from 0 to 100 km/h (0-61 mp/h). For a mid-80s car, this is truly unrivaled performance. And even today, the HF Integrale can still with other cars in its class. It is a very nice classic car to see, especially with the rally-livery. It is for sure a unique appearance in the street scene of Monaco! 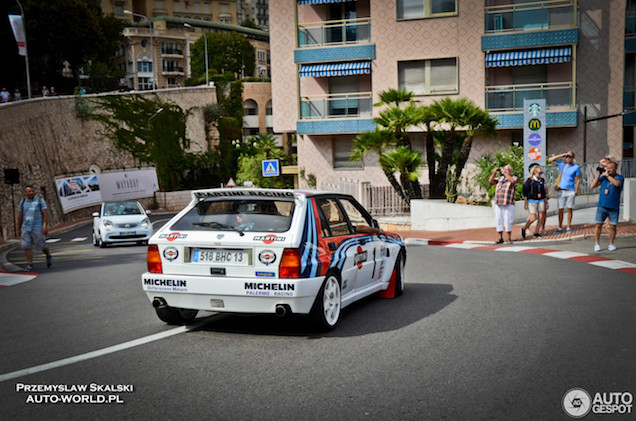