Later this year, Aston Martin will show their new DBS. With the appearance of the new model they want to increase the gap between Aston Martin Virage and the DB9. The styling is going to be in the direction of the One-77. AutoCar made the pictures on the Nürburgring.

According to Autocar, the focus of the DBS was going to be on more power, a more aggressive appearance and a completely redesigned interior. Who the spyfoto below mentioned sees a notable thing. The car got much harder lines and is a bit bigger. The front grill is bigger and underneath the grill they added an extra spoiler. The appearance will be more aggressive, exactly what Aston Martin wants. At the back are redesigned taillights visible. The interior will be a major qualitative step forward. The inspiration for the new interior came from the One-77.

Underneath things will be changed too. The V12 engine in the current DBS is good for 517 hp. In the version that will be unveiled later this year we’ll find a V12 with 557 hp. Power is going trough the new ZF-gearbox. This gearbox has eight resists.

When the car is going to be seen for the first time is unknown. Pebble Beachin in August or the month after that in Paris seems obvious. 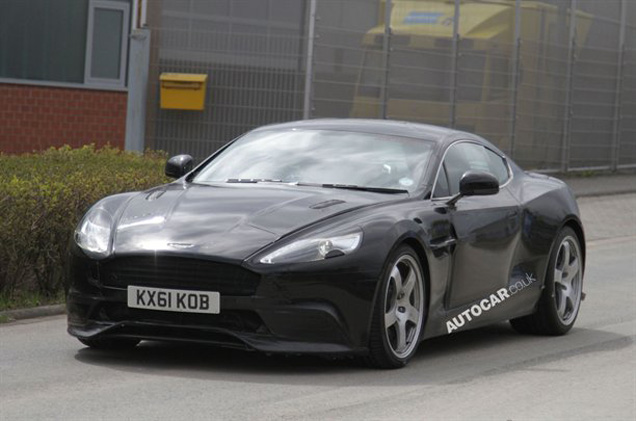