The ‘koopmanshuis’ in Leusden, the Netherlands is a place where the Dutch importer of Bentley (Pon) has its official Bentley dealership. It’s a place where you can tailor your new Bentley specifically to your taste and needs while having a glass of expensive wine or a nice cup of coffee. A short while ago this place has been entirely renovated. When we picked up our car for the weekend, a Bentley Continental GT V8 S painted in the striking color Flame Orange, the paint of the building only just dried up.


A few days before we picked up the car the official unveiling of the renovated ‘koopmanshuis’ took place. Back then we already had a brief look at the car and we managed to get in the plush black leather seats to take it out for a review. The Bentley Continental GT V8 S is yours for a staggering 241.000 euro’s here in the Netherlands, but you’re not done yet. This car has the optional Mulliner package which comes with the typical ‘diamond-stitched’ leather, it looks amazing in Beluga black with orange stitching to match the car’s exterior color. This car also has the carbon fiber dashboard and a Naim-soundsystem to enjoy your music collection at its best while cruising down the highway. The total price of this car? Let’s just say it’s close to 300.000 euro’s... 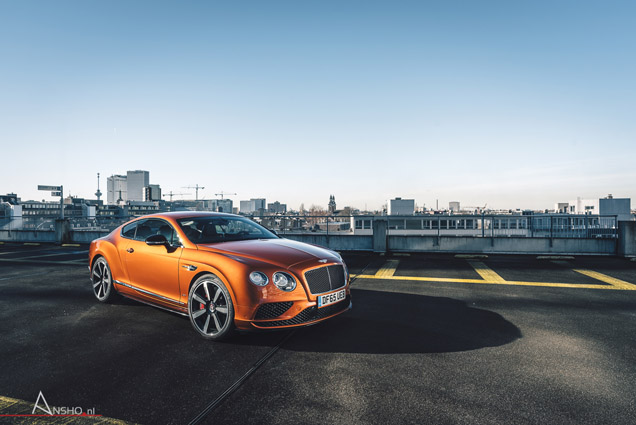 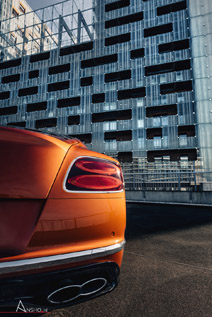 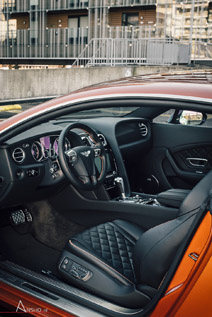 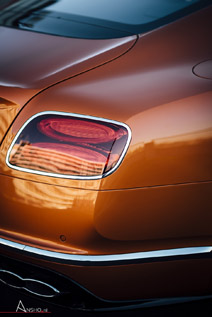 The Continental GT was a real cash-cow for Bentley. The car was introduced over ten years ago (feel old already?) and sales have always been really good for a car that costs this much and considering that it only had a W12 under the bonnet back in the day. You could go as far as to say that in cities like Monaco and London the GT has the status of a ‘shopping car’, a bit like a Volkswagen Golf. Bullseye for Bentley in terms of sales and profit, although the GT is often associated with less aristocratic parts of society, rappers for example. Since a couple of years Bentley expanded the Continental range even further by adding a V8 to the list of available engines. The W12 is only for the real connoisseurs now, people who gladly pay the extra price and taxes to have the top-of-the-bill model. For the rest of the people, us mere mortals, the V8 is more than enough and offers about the same specs as the W12 in terms of acceleration. The most noticeable difference is in the engine sound, the V8 is far more appealing to the sporty driver in that prospect. It sounds like a machine gun when you let of the throttle and under full load your ears get treated with a nice deep growl. 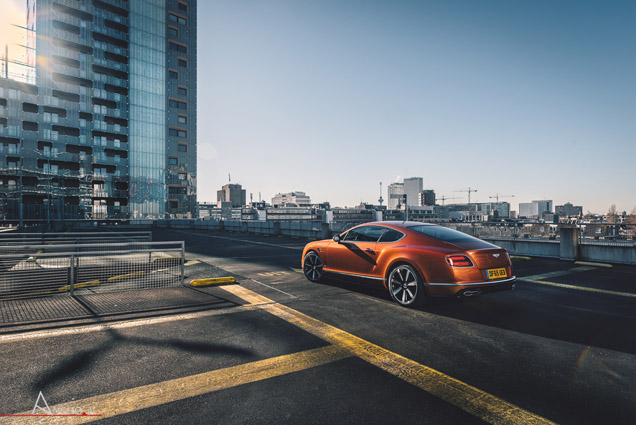 The GT V8 S accelerates from 0-100 in 4,5 seconds and the top speed is reached at 309 kph. Considering the car weighs 2295 kg these numbers are quite an achievement. If you ever go on a top speed run with the GT, be assured of the fact that the car doesn’t really come to a halt very quick. Even with the large ceramic brakes (at no extra cost if you get the Extended Sports Specification) you have to get on the brakes quite hard sometimes to make this cathedral on wheels stop. While stopping power is affected by the heaviness of the car, the weight makes sure that the car is really stable at high speeds. Combine that with the four wheel drive system that always keeps traction no matter the circumstances, and you have a car that’s completely foolproof. 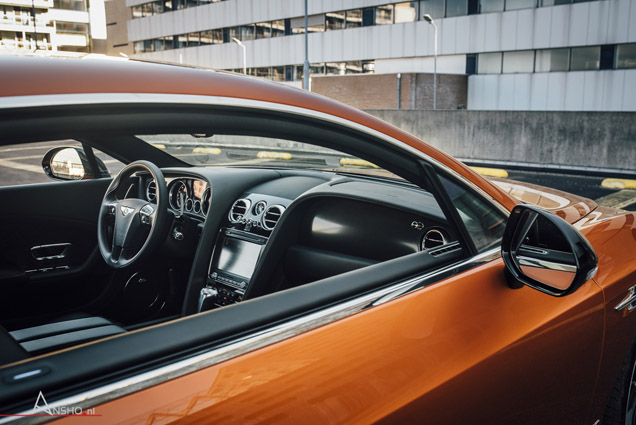 The Continental GT V8 S is a cruiser to die for. The refined ZF-gearbox does it’s job virtually unnoticed to maximize comfort; you can hardly notice it shifting and at speeds around 140-150 kph the V8 runs at just below 2000 rpm. If you have decided 150 kph isn’t fast enough, the acceleration to higher speeds is effortless as well. The V8 hardly has any trouble with the enormous weight of the car. But wait, there’s more. In good Bentley fashion the interior is also a place of joy and endless comfort. The seats are super soft and of course have a massage function. The multimedia system is very easy and intuitive to operate, no complex menus and other geeky stuff that normal people don’t understand. All is good, but as always there are some things we are not so fond of. The buttons on the center console used to be made out of chrome and metal, right now it’s all just standard stuff from the VAG-group. So if you have a Golf, chances are the buttons in your car can be found in the Bentley as well. That’s a bit of a shame if you ask us, it doesn’t to justice to the soul, spirit and heritage of Bentley. 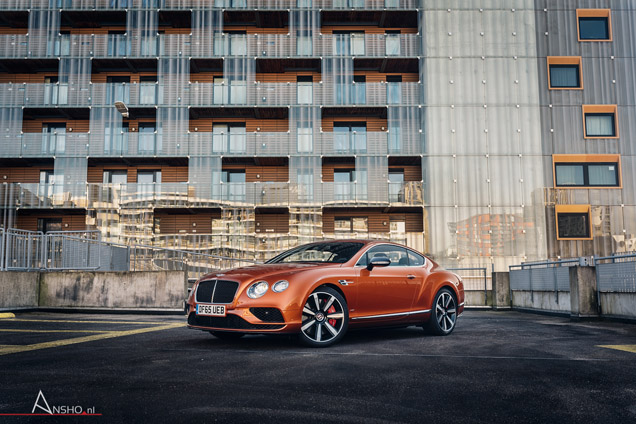 The V8 S is of course made for the Bentley-customer who wants a bit more than just the standard V8. The V8 S is a bit more sporty than the non-S model thanks to a modified suspension with multiple settings, from comfort to sport. This gives the car a bit of a spit personality: put it in comfort and it becomes rather wafty, put it in sport and it remains flat in the corners and the overal stiffness increases. As we’ve mentioned before though: it still has more than two tonnes of weight to carry around, so don’t get carried away too quickly... 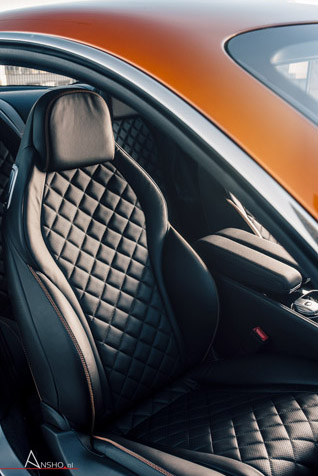 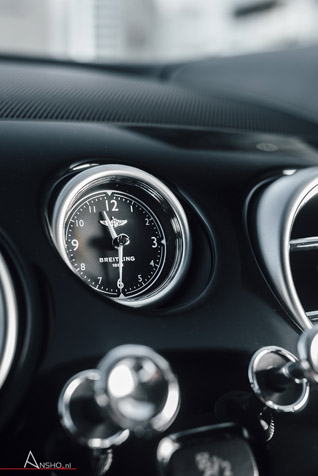 Does the Continental GT actually have competitors? Bentley knows the Continental GT V8 S hardly has any competitors. The Porsche 911 Turbo is a far more sporty car and the Ferrari GTC4Lusso is only available with a V12. The only competitor that would come close to the GT V8 S in terms of form and function is the Aston Martin DB11, but that car also only comes with a V12 for now. So yes, the Continental GT V8 S fills a unique gap in the market and maybe that’s why the sales figures are so good. The Continental GT offers luxury, power and is a nice car to drive without showing off too much (although the color Flame Orange isn’t helping very much). The lines of the car, designed by Dirk van Braeckel, still look awesome and timeless. We all know that there is a new Bentley Continental in the works, but for now this car does just fine. We love the 8-shaped exhaust and the sporty front splitter on the V8 S compared to the W12 model, which looks a bit more conservative. Therefore we would immediately know what car to pick: the V8 S with the sports exhaust. The sound is better than that from the W12, it’s cheaper and it’s more fun to drive. Park it on the driveway, Pon!