Mansory tries to break push the boundaries with every limited model they build. One of the most impressive projects still is the three years old Mansory Cormeum. Only fifteen copies were built of which the first copy was spotted in China. We had to wait for a while but now the second copy is uploaded to Autogespot. The owner is doing a trip through Europe with his Mansory cars!

The owner of this Mansory Cormeum and Gronos is a big fan of Kourosh's creations. Next to this cars his Mansory Stallone and the Gronos were spotted in Kiev. Other Mansory cars he owns are the Mansory CLS Widebody and the Mansory Vivere. The Cormeum and Gronos are now used for a tour through Europe. First, the car was spotted in Geneva followed by Monaco. In Monaco, this carbon fiber SLS AMG feels at home. There aren't much cars that attract so much attention.

The Cormeum is very limited while you will see a LaFerrari or a Lamborghini Aventador LP700-4 a few times a day in Monaco. In addition to the copy that was spotted in China, this copy has glossy carbon fiber. Together with the bright yellow Gronos, this is a very impressive convoy. Mansory gave the SLS AMG a completely new bodywork which isn't only wider but also longer. The Gronos produces up to 840 hp and the Cormeum produces 800 hp. Remarkably, the G-Class is even more expensive than the Cormeum. The Cormeum will cost you up to 540.000 Eurs while the Gronos costs up to 750.000 Euros! 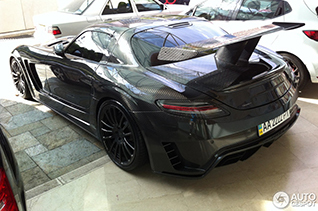