Who would've thought that two simple buttons would cause so much joy? The real fun starts with the combination of the push-to-start button and the M-Performance exhaust. According to the label attached to the remote control this mode is only to be used on the track but we beg to differ. It's M-Performance exhaust time, all the time. Let's go the the Hockenheimring!


It should be clear, we're in a BMW M2 with many M-Performance parts. The best one may be the exhaust, but the other goodies are what makes the M2 look so much better than a 'normal' one. The only thing that was not really necessary was the M-Striping, but that's a matter of personal preference. We've received an M2 for a couple of days and we're planning on having some fun. The Hockheim track is open to us however the weather forecast isn't all that great. The report says there will be lots of rain so we packed an extra umbrella as backup. Our fears became reality when, after a great trip over the Autobahn, we arrived at the little village of Hockenheim, where it seemed like the clouds did their absolute best to make everything as wet as possible. It seems like the only good time to be in this village is during big events like the Formula 1 and DTM races. 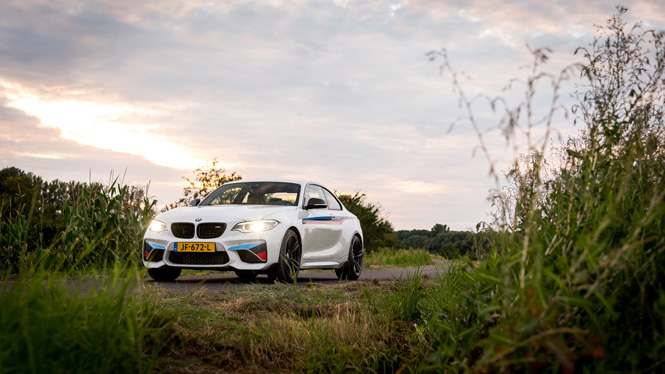 The track is very wet, which makes it very slippery. This curbed our enthusiasm because it wasn't possible to go to the max on the track. However it is fun to play with the M2 in the rain, it feels very much like the M3 E46. The M2 handels the drivers instructions with extreme precision and it is very responsive. Occasionally you can read reports where people say that the M2 isn't all that great with 370hp. We don't agree. This is a the perfect car to just have some fun with, without having to worry too much what will happen if you hit the gas a little bit too soon. Horsepower really isn't everything! Too many horses on board may even be worse than being just a little under powered. In our opinion the M2 is the perfect mix. BMW did a great job on the suspension as well. The car is perfectly balanced and you can feel it every moment you're behind the wheel. Both on the road as well as on the (very wet) track! 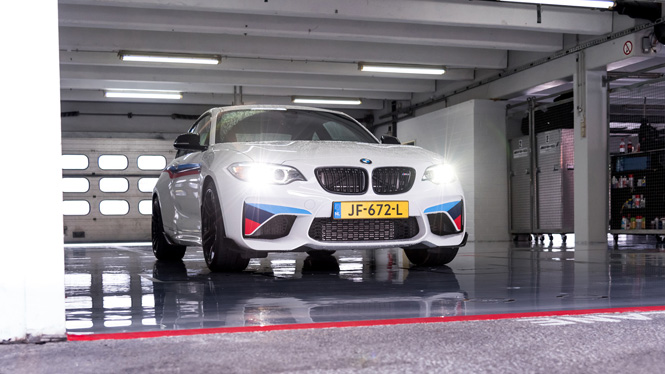 We've been on going on about all the great things about this car and the list is only getting longer. When talking about the interior we can be brief. Like always with BMW the interior is sleek and in order. This car had the carbon fiber package and some extra alcantara bits which makes the car look sporty on the outside and on the inside. If you go for the standard interior it may disappoint a bit.

Of course after the Hockenheimring it's time for an other famous german ring. This ring has many great road around it to give you a perfect way to test the corner combinations in the M2. Unfortunately that didn't happen since the rain followed us from the Hockheimring to the Nurburgring. Rain is good for something though, because it's a perfect excuse to see how the car handles when power sliding. A great success. The M2 is very easy to drift and even easier to control while doing so, and that without the 'drift mode'! The M2 is beginning to profile itself more an more as a fun car, but also as a car that's comfortable for the long haul. The M2 should become a great success and we know exactly why! 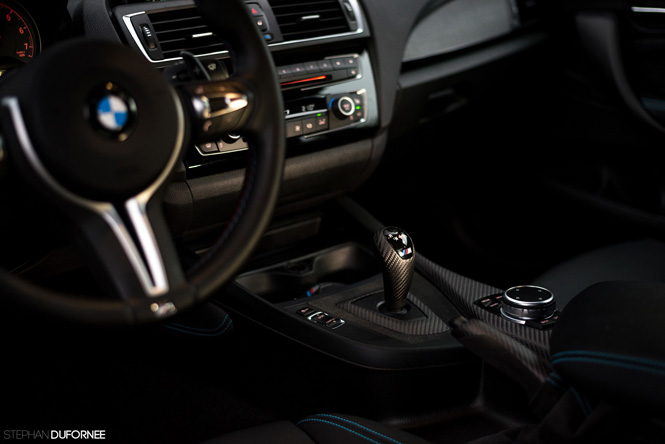 The M2 we had has many M-Performance parts, as mentioned before. On the rear there's a big diffuser that leaves enough room for the M-Performance exhaust with carbon fiber tips. If you look at the trunk you also see a carbon fiber spoiler. The side skirts are carbon fiber as well, which improve the aerodynamics. The price of the M2 is €79.990. If you tick a few boxes you'll find yourself in the €90k range. A lot of money for a 2 series BMW? No! This thing may not be cheap, but you can't put a price on fun. As soon as you get behind the wheel and find yourself near some nice roads you'll remember why this car is worth every penny. Our advice: leave the manual transmission at the dealership. This may be very controversial but the automatic gearbox shifts perfectly, it saves a considerable amount on tax. 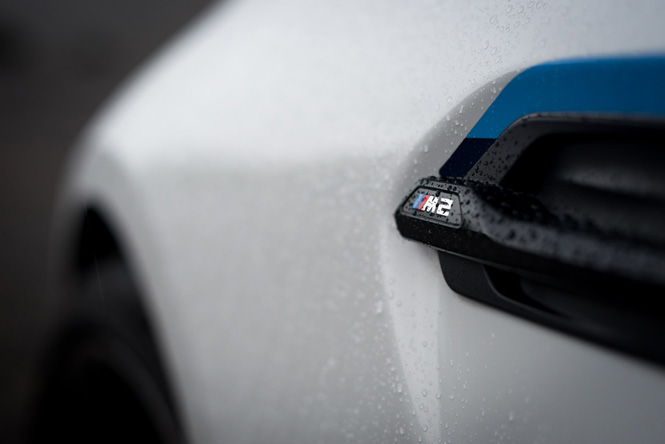